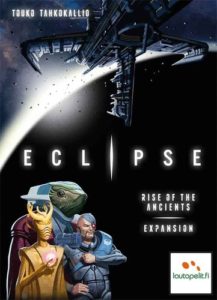 Eclipse: Rise of the Ancients is a Sci-Fi board game expansion to Eclipse, which combines resource management, exploration, technological advancement, and upgrading spaceships in preparation of ship-to-ship combat.

The expansion adds 4 new races, new technology, new enemies to fight, new social options, and more.  Be aware that this review will only really make sense to those who are already familiar with the core game, the review of which can be found here: Eclipse Board Game Review.

A mix of rogues and renegades, this ragtag rabble of rowdy raiders razes other races in a ravaging rush. (Okay, stopping now).  The new “war” race, the Syndicate is a great choice for those who want to win by combat, and lots of it.

With two starting interceptors, the ability to gain extra Money per ship they destroy, and an unprecedented FOUR ship movements per Move action, this wretched collection of scum and villainy excels at striking quickly and in large numbers, and reaping additional rewards from combat.  In addition, they trade Money down at a rate even better than Humans: 3->2, rather than the usual 3->1.

Of course, these benefits come with their drawbacks. They only have two Colony Ships, so populating planets is a slow process for them.  They have no Dreadnought ship: there’s a big, empty hole on their mat where the blueprint is supposed to be, replaced with nothing at all.  Which makes sense, as they are not a proper “nation” of any kind, and their advantage lies in moving a large number of smaller ships at once.  They also only have two Ambassador Tiles.

Which might not be that big a problem for them, in the end: Did I mention they also don’t get -2 Victory Points if they hold the Traitor Card?  Happy hunting!

Like the Hydrans of the core game, the Enlightened of Lyra are a race that just want to be left alone and advance their civilization… THROUGH SCIENCE!  A defensive team (for the early game at least), the Enlightened can build up and build up, and then either win through sheer tech advancement points, or unleash a wave of pain late game to steal the win.

In addition, the Enlightened can flip Colony Ships over to re-roll a die they throw in combat.  Combined with no other negatives besides the usual non-Human 2 movements per Move action and 3->1 conversation resource rate, these golden… samurai… bug people?… are fairly versatile.

These fish/lizard people are among the most defensive-oriented in the game, and make turtling look utterly badass.  How badass?  For one thing, they can start off building Orbitals.  Pretty sweet, right?  An extra Economy/Science planet per system is nothing to sneeze at for 5 Materials each, and allows them to be fairly isolationist, but keep up with others in resource gathering.

But wait, there’s more. Those Orbitals? They’re also Star Bases.  Yeah, The Exiles saw a Star Base and thought “Why would I build a ship that both can’t move, and doesn’t give me resources?”  So they combined both.  They have no blueprints for Star Bases, and instead that space on their board details their Orbital’s blueprints.

What’s that? More you say? No, surely not! Each Orbital they control also gives them +1 Victory Point at the end of the game!  The Exiles may not like being excluded from the Council and the rest of galactic civilization, but with advantages that favor playing defensively so well, they’ve gotten damn good at it. (Can you tell this is my favorite new race?)

The new “humans,” these three alien races are functionally identical to each other, and are on the back of each of the other three unique race boards. They have a number of advantages and disadvantages that allow them to suite a fairly versatile and adventurous play style, rewarding Exploration and Research.

They receive a free Discovery Tile when they reach the 4th space in a Technology track.  In addition, they get 1 Victory Point at the end of the game for each Discovery Tile they flip, making the extra resources, technologies or ships they can alternatively provide much more beneficial.

They only flip one Colony Ship instead of 2 with each Influence action, but may flip unused Colony Ships for an extra resource of any kind. And as usual for non-humans, they may only move two ships per Move Action (or one ship twice) and trade resources at a rate of 3->1.

New Ancient Enemy ships, a new Galactic Center tile (with a vastly more powerful guardian), new secret technologies, advancements, and the ability to form true Alliances with other players (able to move through each other’s spaces, participate in combat together, or share victory/defeat), and more make this expansion well worth the investment for veteran players that want to spice their games up.  There’s even a rule for concurrent turns, so game-play moves faster—which, let’s face it, with up to 9 players in a game, is sorely needed.