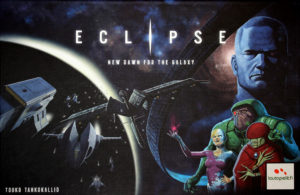 Eclipse is a Sci-Fi board game that combines resource management, exploration, technological advancement, and upgrading spaceships in preparation of galactic combat.

Basically it’s got everything you could ask for in a space themed board game.

War rages across space, and multiple factions vie for dominance.  The basic game comes with 6 player mats, defined by color. Each mat has two sides: a human faction, and an alien race.  The 6 human factions are mechanically identical, and have the fewest special rules (beneficial or harmful).  The 6 alien races (though technically one race are robots) are all unique, in everything from varying ship power to construction costs to research bonuses to movement penalties to exploration options, and much more.

Overall this provides 7 unique playstyles for up to 6 players to choose from (the expansion adds another 4 playstyles and allows for up to 9 players).  Beginners are recommended to choose human factions until they grasp the basics of the game, and then can choose an alien race to specialize in the strengths of those races.

Play consists of round-robin style turns in which you can choose to explore the galaxy, populate planets, research technology, upgrade your ships, build ships, or move ships.  The player with the most Victory Points at the end of the 9 rounds (which can consist of many, many individual turns) is victorious, and you can gain Victory Points by conquering explored systems, researching technology, winning in combat, and more.  In this way there are multiple paths to victory, allowing the different races to play to their strengths and have very different priorities, but still ultimately win the game.

Each player starts with one hexagonal tile, spaced out from each other around a middle tile.  When you explore, you flip a numbered tile over from a stack, and place it somewhere around your tile where warp gates match up.  If there are planets on the tile, you may colonize them for sweet, sweet resources (Money, Science, or Materials, color coded by planet type as Orange, Pink or Brown. White planets are wild, so you can choose what resource they will give you).  If there are Ancient Ships, you must first fight them before you can conquer the planets.  Combat is done through d6 dice rolls, with 6 or higher (from modifications) being a hit.  The amount of damage you do is modified by the weapons your ship has, and there are upgrades for ships to add to your dice roll results (targeting computers) or subtract from enemies’ (shields).

Researching technology costs Science, and allows you to permanently acquire everything from upgrades for your ships, to new structures to build, to new resource gathering methods, and even Warp Field Generators to traverse systems without matching warp gates, or Neutron Bombs to eradicate entire systems you’ve invaded.  Once you have researched the proper ship upgrades, you can then Upgrade them for better weapons, hull, shields, targeting lasers, engines, or energy sources.  All upgrades automatically apply to all your ships, of which there are 4: Interceptors, Cruisers, Dreadnaughts and Orbital Defense.  The bigger ships cost more, but have more spaces available for upgrades.

Once you have sufficient Materials, you can use them to build more ships in any system you have conquered.  You can then Move those ships into other systems to fight the neutral Ancient Enemies that have been discovered, or invade enemy player’s systems once they’ve been conjoined.  If two players ever move onto the same system, they are at war with one another.  If they agree to diplomatic relations before that occurs, they exchange Diplomacy Tiles (which gives a Victory Point and acts as a White Planet for both players).  Attacking a player who has your Diplomacy Tile brands you as a traitor, and not only do you lose their tile, but you get a Traitor Card that gives you -2 Victory Points at the end of the game. The most recent person to betray a diplomatic relation gets the card (which can result in highly amusing “hot potato” flurries of backstabbing near the end of the game).

Each turn you do something (Explore, Research, Build, Move, etc.) increases the Money tax you must pay at the end of the round.  The end of the round is also when you collect resources from your planets, so rounds are limited in turns by how much money players have available.  The first person to pass their turn will go first the next round, but if you have enough Money to pay a higher tax at the end of the round, you can get ahead by taking more turns.  Resources can be traded at a rate of 2->1 for humans and 3->1 for aliens (4->1 for one race), so good resource management is well rewarded.

Eclipse is ultimately for a very specific type of gamer: learning the game takes anywhere from half an hour to an hour with an experienced player there to explain everything, and setting up the table can take another half hour in itself.  Games themselves usually take about an hour per person playing: less if you use concurrent turns, which is for advanced players.

My only personal gripe is the luck factor: despite the many upgrades and strategizing you can do to prepare for it, combat is ultimately decided by dice rolls, and a bad streak of exploration early game can be crippling. Negotiating friendly house rules can mitigate the latter, and as for the former, I can hear the mutters of “Well duh, it’s a board game!” to which I reply “Game of Thrones. Recognize.”

That said, if you love dozens of moving pieces (literal and figurative) and almost endless metagaming, you’ll probably have tons of fun with Eclipse.  The races are varied enough to keep recurrent games fresh, while the social aspect reminds us of what makes board games continue to shine in the digital age (speaking of which, the game has been made for tablets now). If you’d like to read more about eclipse check out the review of the expansion: Rise of the Ancients.