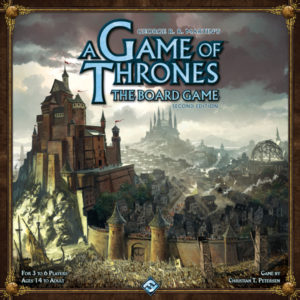 “When you play the Game of Thrones, you win or you die. There is no middle ground.” –Cersei Lannister

Like that line? Of course you do. Everyone does. It’s an awesome line.

Prepare to hear it so many times that you’re ready to commit regicide.  Welcome to Westeros:  Keep your sword close and bring your best poker face.  (Incest optional)

Before HBO adapted George R. R. Martin’s epic book series into a TV show, a board game with two expansions was made, and then streamlined into a comprehensive 2nd edition.  This review will be on the 2nd edition, which allows 3-6 players to take control of 6 of the 7 Major Houses in Westeros (House Arynn is neutral).

One of the great things about this game is anyone can play it. The game spoils nothing of the book or TV show’s plot, and those who have read the books or seen the show are at no advantage either: they’ll simply have extra flavor to draw on as they recognize the names of locations or character-cards. Another great thing is how little a factor luck is.  There are minor elements of luck in the game, but everything from movement to combat is all about strategy, politics, and bluffing.

The map of Westeros and its nearby islands is the centerpiece of the board, with various other things to keep track of around it.  The continent is divided into spaces, and each space has its own mix of bonuses that make it worth taking. 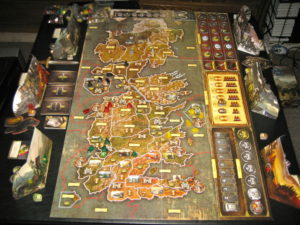 Each unit counts as 1 for purposes of supply.

A game consists of a maximum of 10 rounds, within which each player takes multiple turns based on which orders they put down during that round’s planning phase.  One of the most unique things about GoT is its method of taking actions. Each player has fifteen disks, which come in five types: March, Defend, Support, Consolidate Power, and Raid.  There are three of each type, with one of those three being the Star (*) token, an even stronger version that can only be used in limited quantities.

At the beginning of every round in the planning phase, each player puts down a single disk face down on every space where they have at least one unit or influence token.

Once everyone has placed their disks face down, everyone turns their disks over and can no longer place new ones.  Disks are acted on in round-robin style, as decided by the players’ position on the Iron Throne track.  Any Raids on the board are always resolved first, then removed, until none remain.  Then Marching orders are resolved in the same way. After all Marching orders are resolved, then Consolidate Power orders are.  At the end of the round, all disks are regained.  One of each type of disk has a * on it to represent a boosted effect.  How many * disks you can use per round is decided by player position on the King’s Court (Raven) track.

When one House’s units move into a space occupied by another House’s units, the strength of the Marching side’s units is counted (modified by their March disc and any Support disc in spaces adjacent to battleground), and the strength of the defending side is counted (modified by a Defend disc, if present, and any applicable Support disc adjacent to battleground).  If Support discs are nearby that are not owned by either player, they each may ask the third (or fourth) party for support for their side.

After army strengths are determined, both the marching player and defending player choose a card from their House and lay it face down. Every House has 7 unique cards portraying a different major character from the House.  Once both cards are down, the players flip the cards over.  The number on top of the card is added to their army’s strength.  Then whatever special effect is on the card takes place.  If the winning side’s card has any Swords on it, they may destroy an enemy unit for each Sword, minus any Fortification icons on the losing side’s card.  Remaining units are turned on their side to indicate they are “routed” and move back to a space of defending player’s choice.  When a player uses their last card, they get all the other cards back to their hand.

House Cards are the major distinguishing mark between Houses, besides starting position on the board and on the three Tracks.  Some have very powerful brute-force cards, like Victarion Greyjoy or Eddard Stark, while others, like Tyrion Lannister or Margaery Tyrell, give low power bonus to armies, but have unique special abilities that can utterly swing a battle, or even entire round, in your favor.  Guessing which card your opponent will play and deciding on the right one to win the battle without wasting a high card on overkill is one of the many marks of a skilled player. But beware the bluff!

The other part that will put players on edge is bidding. Each player starts with 5 Power tokens, which are used to claim land that you March from so you can retain ownership of it.  They are also used as currency to bid for the 3 Tracks when the Game of Thrones card comes up.  Each player hides their total Power behind a screen, and puts a number of them closed in one hand, then raises it.  Once all payers have raised their closed fist, they open them to reveal how many they have chosen to bid. The highest bidder gets first place and the Throne piece, second gets second place, and so on. Then the bid Power tokens are discarded, and players bid on the Sword. The same process is then repeated for the Raven with whatever Power players have left.  All ties in bidding is decided by the keeper of the Throne: even the bid on the Throne Track, until they lose it.

When the Wildling card comes up is the other time bidding occurs. This time, all players are joined together to beat the number on the Wildling Track, anywhere from 2-12.  Each wildling card has two effects, which are not revealed until everyone bids.  If the total bids of the players exceeds the Wildling Track, the Victory side of the card takes effect, and the player who bid highest gets a special reward.  If the total bids are less than the Wildling Track, the Defeat side of the card takes effect, and everyone suffers a negative effect, with the player who bid lowest getting an extra negative effect.  This can occur as often as every other round, or only once or twice a game, and these event cards are the only truly “random” factor in it.

Complexity: 1-2-3-4-5
High. Moderate amount of moving parts, and many layers of gameplay.

Replay Value: 1-2-3-4–5
Great! Different starting houses gives lots of variety to playstyles and outcomes, and the level of skill involved lets you improve the more you play.

GoT is quite a few steps above most well known strategy games like Risk. Learning the game takes at least half an hour with an experienced player there to explain everything, and unpacking the pieces and setting up the table can take another fifteen minutes unless you keep things carefully divided (I recommend little plastic zip-locks).  Games themselves usually take about an hour per person playing, so plan accordingly.

In the end though, it’s well worth it.  By far one of the funnest war games I’ve played, my favorite part is how little a factor luck is.  The game hinges on social pressures between players (trading offers for alliances, currying favor with whoever owns the Throne, bluffing each other over bidding wars and which card your opponent will play) and tactics on placing disks that anticipate what opponents (and even allies) are putting down.

Each House plays very different due to their geographical location and cards, some favoring constant assault, others a turtle and slow crawl to victory.  And with the expansion, there’s even more variety in both starting positions and House decks.  Overall an awesome game for both fans of the books/show and those without knowledge of it.